A place with character

The history of Abtenau begins with the settlement by the Bavarians in the 6th century AD and the Christianization by St. Rupert at 700.
The name Abtenau is noted for the first time in a deed of donation from 1124, which is kept in the archives of the St. Peter monastery (Salzburg); Archbishop Konrad 1 gave the monastery some lands that also included the Lammertal. The monastery of St. Peter still owns forest and agricultural areas in the Lammertal today.
Peter drove the settlement of the Abtenau basin forward since the 12th century. The first Abtenau church was built in the second half of the 12th century by Archbishop Konrad 3.
During the feudal period of the 14th and 15th centuries, the Lammertal was already well-ordered with around 200 inhabitants; Land judges and land judges in Abtenau have been proven since 1332.
The Lammertal does not seem to have been involved in the peasant uprisings of 1462, and it was spared the subsequent peasant wars.

In 1507 Abtenau, now a small rural center in the Lammertal around the mother parish, was elevated to market status by Leonhardt von Keutschach, Archbishop of Salzburg, and thus received market rights and civil liberties such as buying, selling, trade and commerce as well as the right to annually to hold a fair on Maximilianstag.

several beer and wine bars, which were opposite the church district. This division still exists today. On one side of the market square are the church, rectory and cemetery; There are five inns across the street.
The school system in Abtenau began in 1600 and, like everywhere else, had its origins in reading the Holy Scriptures and - after the Council of Trent - the catechism.
On August 1, 1850, a postal expedition with driving mail was set up in Abtenau
After the Second World War, the development of tourism began with the so-called summer resorts; with the further development of alpine skiing, the winter season later also gained in importance. Today, Abtenau is the largest town in Lammertal with around 6000 inhabitants. It has retained its rural and down-to-earth character and is therefore popular with holidaymakers. 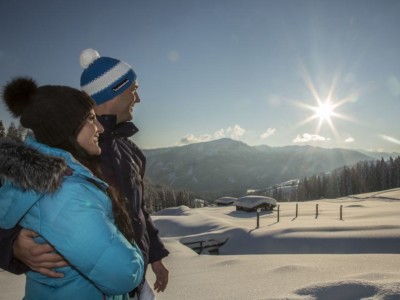 A short time away - vacation between the years